A few weeks ago, we welcomed a new member of the family. A hermit crab.

At the time, my daughter, Lydia, the recipient of said crab (a gift from her Halmoni), named said crab Hello Kitty Crab. And this is why… 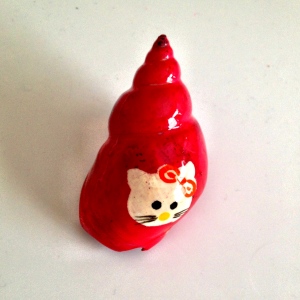 Since then, we mainly refer to this crab as Crabby. And, though hermit it may be, it has stuck with this particular shell and shunned the potential replacement we purchased, which leads me to believe that Crabby, like Lyddie, is in fact a Hello Kitty fan.

From time to time, as the responsible parent I am, I check to make sure the crab is still alive. Because (may I say that the only way you know the following information is if you have ever owned a hermit crab), every now and then, there are very few signs of life. We like to say that Crabby parties all night and sleeps all day. To the untrained eye, SLEEP and DEATH look vaguely similar.

I picked Crabby up. As he/she peeked out of its shell, it looked happy to see me, more or less. I was holding him/her by the sides of the shell, looking into his/her eyes. I’m almost sure those are eyes. Yes. Eyes.

Crabby extended further out of its shell than I had witnessed previously. “Odd,” I thought. I couldn’t figure out what the crab was up to.

Then it became obvious that the crab wanted me to let go.

Crabby extended as far as it could out of its shell so that its sharp legs would have better access to the tips of my fingers so as to poke me into submission and release. I got the hint and put it down.

My only concern, as I mentioned, was the welfare of this little booger. Yet it fully intended to make me drop it instead of submitting to my watchcare.

Do we as believers work under the assumption that we know how best to take care of our own affairs in spite of the fact that we have a sovereign God that wishes nothing but the best for us?

For I know the plans I have for you, declares the Lord, plans for welfare and not for evil, to give you a future and a hope. -Jeremiah 29:11